Solomon made an alliance with Pharaoh king of Egypt and married his daughter. He brought her to the City of David until he finished building his palace and the temple of the LORD, and the wall around Jerusalem. The people, however, were still sacrificing at the high places, because a temple had not yet been built for the Name of the LORD. Solomon showed his love for the LORD by walking according to the instructions given him by his father David, except that he offered sacrifices and burned incense on the high places.

The king went to Gibeon to offer sacrifices, for that was the most important high place, and Solomon offered a thousand burnt offerings on that altar. At Gibeon the LORD appeared to Solomon during the night in a dream, and God said, “Ask for whatever you want me to give you.”

Solomon answered, “You have shown great kindness to your servant, my father David, because he was faithful to you and righteous and upright in heart. You have continued this great kindness to him and have given him a son to sit on his throne this very day.

“Now, LORD my God, you have made your servant king in place of my father David. But I am only a little child and do not know how to carry out my duties. Your servant is here among the people you have chosen, a great people, too numerous to count or number. So give your servant a discerning heart to govern your people and to distinguish between right and wrong. For who is able to govern this great people of yours?” 1 Kings 3:1–9 NIV

If you need wisdom, ask our generous God, and he will give it to you. He will not rebuke you for asking. But when you ask him, be sure that your faith is in God alone. Do not waver, for a person with divided loyalty is as unsettled as a wave of the sea that is blown and tossed by the wind. Such people should not expect to receive anything from the Lord. Their loyalty is divided between God and the world, and they are unstable in everything they do. James 1:5–8 NLT

Are there areas in your life that you have chosen to live in exception to God’s plan? How is that working for you?

Solomon’s life sadly proves that merely receiving wisdom from God does not guarantee wise living. How will YOU close the gap between knowing God’s plan and doing it?

What are you asking God for?

Lord, thank you for giving wisdom generously. Help me to not only see your plan but also live it out!

What have you asked God for recently?

A recap and continuation of Solomon’s conversation with God: “Now, O LORD my God, you have made me king instead of my father, David, but I am like a little child who doesn’t know his way around. And here I am in the midst of your own chosen people, a nation so great and numerous they cannot be counted! Give me an understanding heart so that I can govern your people well and know the difference between right and wrong. For who by himself is able to govern this great people of yours?”

The Lord was pleased that Solomon had asked for wisdom. So God replied, “Because you have asked for wisdom in governing my people with justice and have not asked for a long life or wealth or the death of your enemies—I will give you what you asked for! I will give you a wise and understanding heart such as no one else has had or ever will have! And I will also give you what you did not ask for—riches and fame! No other king in all the world will be compared to you for the rest of your life! And if you follow me and obey my decrees and my commands as your father, David, did, I will give you a long life.”

Then Solomon woke up and realized it had been a dream. He returned to Jerusalem and stood before the Ark of the Lord’s Covenant, where he sacrificed burnt offerings and peace offerings. Then he invited all his officials to a great banquet. 1 Kings 3:7-15 NLT

What did God promise to give Solomon IF he followed and obeyed him?

What was God’s purpose in blessing Solomon so abundantly?

What is God’s purpose in blessing you? Are you letting his blessing pass on to others?

Lord, teach me to embrace your loving plan by allowing your blessing to flow TO and THROUGH me.

When do you suffer from what Pastor Jason called “WDD” (Wisdom Deficit Disorder)?

King Solomon, however, loved many foreign women besides Pharaoh’s daughter—Moabites, Ammonites, Edomites, Sidonians and Hittites. They were from nations about which the LORD had told the Israelites, “You must not intermarry with them, because they will surely turn your hearts after their gods.”

Nevertheless, Solomon held fast to them in love. He had seven hundred wives of royal birth and three hundred concubines, and his wives led him astray. As Solomon grew old, his wives turned his heart after other gods, and his heart was not fully devoted to the LORD his God, as the heart of David his father had been. He followed Ashtoreth the goddess of the Sidonians, and Molech the detestable god of the Ammonites. So Solomon did evil in the eyes of the LORD; he did not follow the LORD completely, as David his father had done.

The LORD became angry with Solomon because his heart had turned away from the LORD, the God of Israel, who had appeared to him twice. Although he had forbidden Solomon to follow other gods, Solomon did not keep the LORD’s command. So the LORD said to Solomon, “Since this is your attitude and you have not kept my covenant and my decrees, which I commanded you, I will most certainly tear the kingdom away from you and give it to one of your subordinates. Nevertheless, for the sake of David your father, I will not do it during your lifetime. I will tear it out of the hand of your son. Yet I will not tear the whole kingdom from him, but will give him one tribe for the sake of David my servant and for the sake of Jerusalem, which I have chosen.” 1 Kings 11:1–13 NIV

Why is a humble heart essential to make use of wisdom?

God told Solomon, “Since this is your attitude…” Do you have any attitudes in your heart that are contrary to God’s plan to bless you?

It is important to note that Solomon’s decisions had difficult consequences for his kids and grandkids. How are you preparing a good path for those who follow your footsteps?

Lord, give me the desire and power to follow your paths so my future and the future of those who come after me can be truly blessed by you.

Do you like to make decisions alone or with a group?

The serpent was the shrewdest of all the wild animals the LORD God had made. One day he asked the woman, “Did God really say you must not eat the fruit from any of the trees in the garden?”

“You won’t die!” the serpent replied to the woman. “God knows that your eyes will be opened as soon as you eat it, and you will be like God, knowing both good and evil.”

The woman was convinced. She saw that the tree was beautiful and its fruit looked delicious, and she wanted the wisdom it would give her. So she took some of the fruit and ate it. Then she gave some to her husband, who was with her, and he ate it, too. At that moment their eyes were opened, and they suddenly felt shame at their nakedness. So they sewed fig leaves together to cover themselves.

When the cool evening breezes were blowing, the man and his wife heard the LORD God walking about in the garden. So they hid from the LORD God among the trees. Then the LORD God called to the man, “Where are you?”

He replied, “I heard you walking in the garden, so I hid. I was afraid because I was naked.”

“Who told you that you were naked?” the LORD God asked. “Have you eaten from the tree whose fruit I commanded you not to eat?”

The man replied, “It was the woman you gave me who gave me the fruit, and I ate it.”

Then the LORD God asked the woman, “What have you done?”

When has your desire led you off the path God created?

What strategies have you used to manage your desires effectively?

God did not ask, “Who talked you into disobedience?” He asked, “Did you choose to disobey”? Adam and Eve gave reasons for their disobedience before admitting their choices. Are you telling the truth and taking responsibility for your own choices?

Where do you get wisdom personally? How have you come to trust your sources?

One day some teachers of religious law and Pharisees came to Jesus and said, “Teacher, we want you to show us a miraculous sign to prove your authority.”

“The people of Nineveh will stand up against this generation on judgment day and condemn it, for they repented of their sins at the preaching of Jonah.

“When an evil spirit leaves a person, it goes into the desert, seeking rest but finding none. Then it says, ‘I will return to the person I came from.’ So it returns and finds its former home empty, swept, and in order. Then the spirit finds seven other spirits more evil than itself, and they all enter the person and live there. And so that person is worse off than before. That will be the experience of this evil generation.” Matthew 12:38–45 NLT

One of the greatest temptations for those having a position of influence or power has been to merely use God as a tool to retain their position of power. Rather than humbly following Jesus, for example, the teachers and Pharisees got bossy with Jesus and tried to get him to perform miracles—“Prove yourself to us!” Why? They were jealous and scared that they would lose their positions of power and influence. What they did not realize was that the life Jesus offered them was better than anything they could coerce or manufacture.

Are you resisting or embracing Jesus’ influence in your life?

Lord, teach me to trust and obey you…not use you! I want the life you offer…help me humbly follow you. 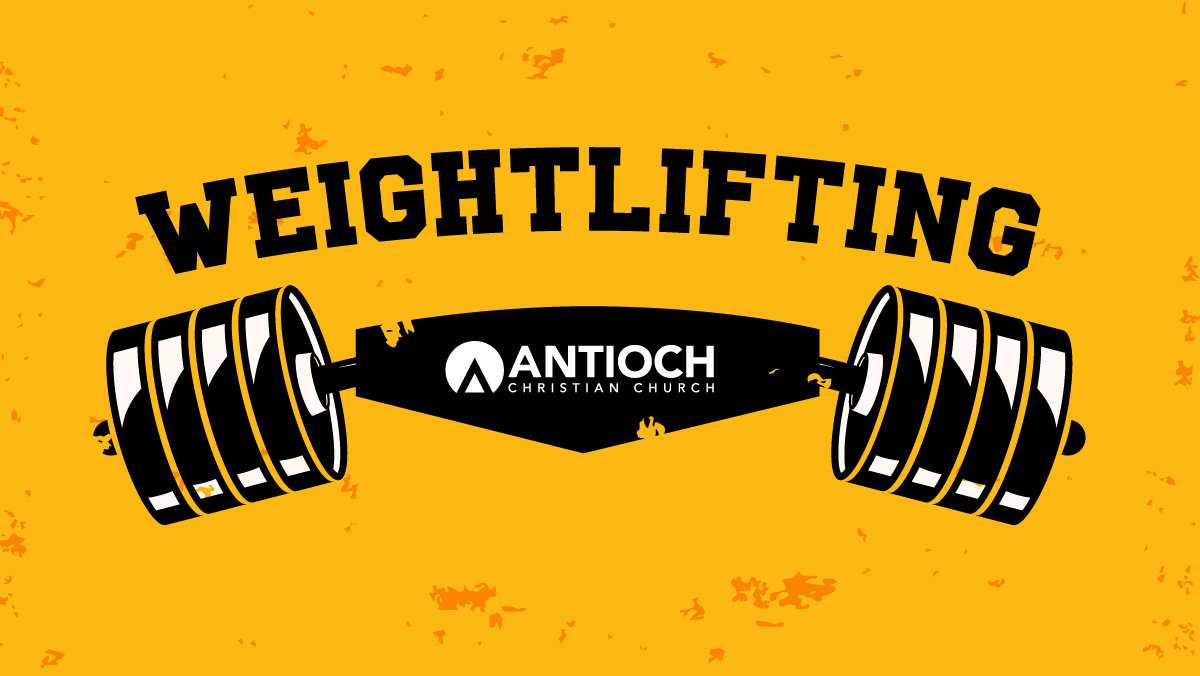 Weightlifting 4 I The Weight of Fear

Weightlifting 3 l The Weight of My Past

Weightlifting 2 | The Weight of Disappointment