Day 1
Day 2
Day 3
Day 4
Day 5
What is most important to you when planning an event: the people, activity, location, weather or food?

“When God remembers, He does something. Remember is an action word.” Pastor Jason

Now the Festival of Unleavened Bread arrived, when the Passover lamb is sacrificed. Jesus sent Peter and John ahead and said, “Go and prepare the Passover meal, so we can eat it together.” “Where do you want us to prepare it?” they asked him.

He replied, “As soon as you enter Jerusalem, a man carrying a pitcher of water will meet you. Follow him. At the house he enters, say to the owner, ‘The Teacher asks: Where is the guest room where I can eat the Passover meal with my disciples?’ He will take you upstairs to a large room that is already set up. That is where you should prepare our meal.” They went off to the city and found everything just as Jesus had said, and they prepared the Passover meal there.

When the time came, Jesus and the apostles sat down together at the table. Jesus said, “I have been very eager to eat this Passover meal with you before my suffering begins. For I tell you now that I won’t eat this meal again until its meaning is fulfilled in the Kingdom of God.”

Then he took a cup of wine and gave thanks to God for it. Then he said, “Take this and share it among yourselves. For I will not drink wine again until the Kingdom of God has come.”

He took some bread and gave thanks to God for it. Then he broke it in pieces and gave it to the disciples, saying, “This is my body, which is given for you. Do this in remembrance of me.”

After supper he took another cup of wine and said, “This cup is the new covenant between God and his people—an agreement confirmed with my blood, which is poured out as a sacrifice for you. Luke 22:7-20 NLT

“While I know Jesus is with me, I have no idea what is coming.” When you feel like the disciples must have felt, how do you respond? How is that working for you?

Lord, thank you for calling us to love you with all of our heart, soul, mind, and strength! Help me to see and take my next step of faith!

What is the most important promise that you have ever kept?

“When God remembers, He does something. Remember is an action word.” Pastor Jason

God remembers His covenant with Noah!

God remembers His covenant with Rachel and Jacob!

Then God remembered Rachel’s plight and answered her prayers by enabling her to have children. She became pregnant and gave birth to a son. “God has removed my disgrace,” she said. And she named him Joseph, for she said, “May the LORD add yet another son to my family.” Genesis 30:22–24 NLT

God made a great promise to all the people and creatures in the world and created a reminder for himself—the rainbow! What does this help you understand about the character of God?

What physical reminders do you have of your commitments?

God’s faithfulness is an example for us to be faithful as well. Are you a faithful and trustworthy person? Can people say that you are trustworthy, honest, full of integrity?

Lord, I want to be faithful as you are faithful. Help me make worthy commitments and be a person of faithfulness and integrity!

What is your general reaction when you are confused?

God remembers His covenant with His people enslaved in Egypt!

Years passed, and the king of Egypt died. But the Israelites continued to groan under their burden of slavery. They cried out for help, and their cry rose up to God. God heard their groaning, and he remembered his covenant promise to Abraham, Isaac, and Jacob. He looked down on the people of Israel and knew it was time to act. Exodus 2:23–25 NLT

Then the LORD told Moses, “Now you will see what I will do to Pharaoh. When he feels the force of my strong hand, he will let the people go. In fact, he will force them to leave his land!” And God said to Moses, “I am Yahweh—‘the LORD.’ I appeared to Abraham, to Isaac, and to Jacob as El-Shaddai—‘God Almighty’—but I did not reveal my name, Yahweh, to them. And I reaffirmed my covenant with them. Under its terms, I promised to give them the land of Canaan, where they were living as foreigners. You can be sure that I have heard the groans of the people of Israel, who are now slaves to the Egyptians. And I am well aware of my covenant with them.

“Therefore, say to the people of Israel: ‘I am the LORD. I will free you from your oppression and will rescue you from your slavery in Egypt. I will redeem you with a powerful arm and great acts of judgment. I will claim you as my own people, and I will be your God. Then you will know that I am the LORD your God who has freed you from your oppression in Egypt. I will bring you into the land I swore to give to Abraham, Isaac, and Jacob. I will give it to you as your very own possession. I am the LORD!’” So Moses told the people of Israel what the LORD had said, but they refused to listen anymore. They had become too discouraged by the brutality of their slavery. Exodus 6:1–9 NLT

What is an area in your life that tempts you to get “dis—couraged”?

Who in your life helps you focus on God, his goodness, and the value of trusting in God’s timing?

What questions do you want to ask God about these situations?

Lord, I do not understand your timing or your plan, but I will continue to believe that YOU are good no matter what!

Who in your life do you need to “remember” your commitment to with action? What will you do?

God remembers His covenant with Abraham!

“But at last my people will confess their sins and the sins of their ancestors for betraying me and being hostile toward me. When I have turned their hostility back on them and brought them to the land of their enemies, then at last their stubborn hearts will be humbled, and they will pay for their sins. Then I will remember my covenant with Jacob and my covenant with Isaac and my covenant with Abraham, and I will remember the land. For the land must be abandoned to enjoy its years of Sabbath rest as it lies deserted. At last the people will pay for their sins, for they have continually rejected my regulations and despised my decrees.

“But despite all this, I will not utterly reject or despise them while they are in exile in the land of their enemies. I will not cancel my covenant with them by wiping them out, for I am the LORD their God. For their sakes I will remember my ancient covenant with their ancestors, whom I brought out of the land of Egypt in the sight of all the nations, that I might be their God. I am the LORD.” Leviticus 26:40–45 NLT

God remembers His love and faithfulness to His people!

Sing a new song to the LORD, for he has done wonderful deeds. His right hand has won a mighty victory; his holy arm has shown his saving power! The LORD has announced his victory and has revealed his righteousness to every nation! He has remembered his promise to love and be faithful to Israel. The ends of the earth have seen the victory of our God. Psalm 98:1–3 NLT

When we say “God is love,” Paul explains in 1 Corinthians that love is both patient and kind.

List some ways God shows his patience and kindness in the world.

List some ways God shows his patience and kindness in your life.

Lord, despite grievous sin in our world, our nation, and even my own heart, you have never diminished in your faithfulness. Please forgive us of our sins and lead us in paths of righteousness so we can honor you!

When did someone show you mercy? What impact did it have on you?

God remembers to be merciful in sending Jesus!

Mary responded, “Oh, how my soul praises the Lord. How my spirit rejoices in God my Savior! For he took notice of his lowly servant girl, and from now on all generations will call me blessed.

For the Mighty One is holy, and he has done great things for me. He shows mercy from generation to generation to all who fear him. His mighty arm has done tremendous things! He has scattered the proud and haughty ones. He has brought down princes from their thrones and exalted the humble. He has filled the hungry with good things and sent the rich away with empty hands. He has helped his servant Israel and remembered to be merciful. For he made this promise to our ancestors, to Abraham and his children forever.” Luke 1:46–55 NLT

Then his father, Zechariah, was filled with the Holy Spirit and gave this prophecy: “Praise the Lord, the God of Israel, because he has visited and redeemed his people. He has sent us a mighty Savior from the royal line of his servant David, just as he promised through his holy prophets long ago. Now we will be saved from our enemies and from all who hate us. He has been merciful to our ancestors by remembering his sacred covenant—the covenant he swore with an oath to our ancestor Abraham. We have been rescued from our enemies so we can serve God without fear, in holiness and righteousness for as long as we live.

“And you, my little son, will be called the prophet of the Most High, because you will prepare the way for the Lord. You will tell his people how to find salvation through forgiveness of their sins. Because of God’s tender mercy, the morning light from heaven is about to break upon us, to give light to those who sit in darkness and in the shadow of death, and to guide us to the path of peace.” John grew up and became strong in spirit. And he lived in the wilderness until he began his public ministry to Israel. Luke 1:67–80 NLT

Mary, the mother of Jesus, proclaimed that God has scattered the proud and lifted up the humble. Which are you pursuing – pride or humility before God?

Zechariah stated that his desire was to “serve God without fear, in holiness and righteousness for as long as we live.” Is that your desire?

Lord, thank you for sending Jesus to our broken world to give his life as a ransom for many. I am truly humbled by your kindness and patience. Use me to help people be reconciled to you! 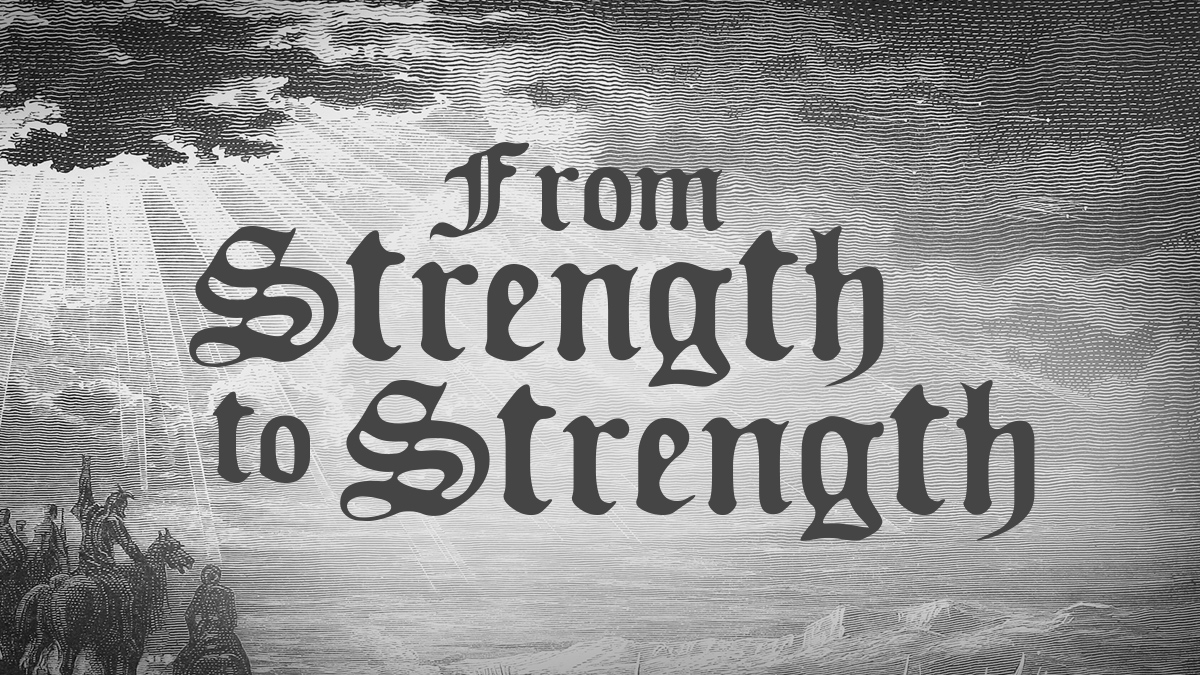